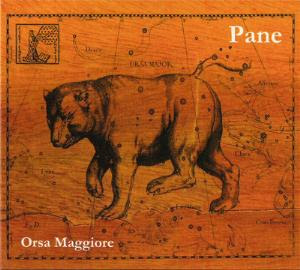 The third album from this Italian band. A band, make that a project, lead by the author and (opera) singer Claudio Orlandi.

I have not had the chance to listen to or even encountered the first two Pane albums. I therefore have no idea what they sounds like. Pane and the Orsa Maggiore is largely a vehicle for Claudio's voice. That voice is dominating this album. His voice is very good though. The music itself is folk rock with a lot of pop influences. It is being performed by flutes, piano, keyboards, guitar and drums. There is no bass here.

Claudio's vocals is everywhere and the music itself never gets the chance to breathe on it's own. There is too much Claudio in my view in Pane. Less is more, I would say. The vocals is also a bit too much in my face and I get the feeling of being screamed at. When that is said, this is a pretty good album though. It has a good ambience and the ballads are very good. That's when Claudio takes his foot/voice of the accelerator and let's his voice and the music breathe.

Orsa Maggiore is not everyone's cup of tea and I think Angelo Branduardi does this genre far better than Pane. It is a good album, though.