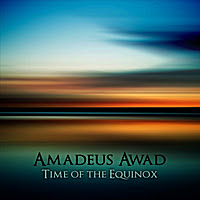 Amadeus Awad is a guitarist from Lebanon and this is his first album. He has got some help from one of Yngwie Malmsteen's vocalists. That kind of gives the game away. Or gives Time Of The Equinox away.

Another guitar god who is throwing his axe around in a recording studio. Thankfully, this album has something more to offer than pure shredding. Some proper song structures and some pretty pastoral melodies. A lot of power metal too. Amadeus or his marketing people has described this as a meeting between his guitar and Middle East music. Maybe that was the idea before it hit the record studio. The result is much more like power metal from Scandinavia, though. Did I mention Yngwie Malmsteen ? I think I did.

Amadeus Awad is probably a guitar god. Time Of The Equinox is a pretty decent album with some pretty dull melodies. This is not entirely a terrible album. I cannot really say I enjoy it though. A decent album, nevertheless.