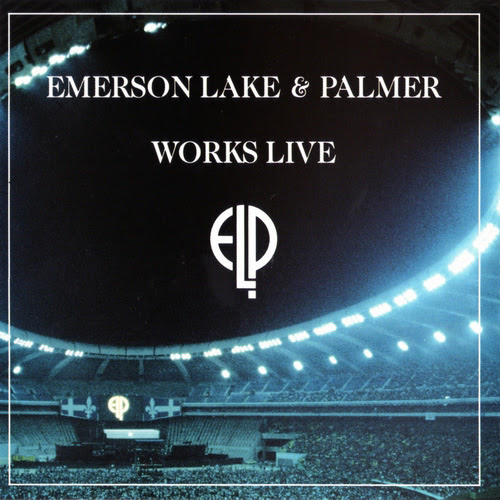 This is basically a "contracts obligations" album and a 2 CDs variation of their pretty dire Emerson Lake & Palmer In Concert album from 1979. I got both as I am a collector of this band and a fan. Well, maybe an ex fan. I am not sure.

Emerson Lake & Palmer has produced one of the best ever live albums in the form of Welcome Back My Friends To The Show That Never Ends from 1974. Works Live though is from another era of this band. The Works I & II albums, that is. Those were more like three solo albums, crammed into two albums.

Works Live though has a lot of very good stuff. The sound is pretty bad though and the fun factor from Welcome Back My Friends To The Show That Never Ends has largely gone. This may have something to do with the inclusion of a full symphony orchestra on this album. A symphony orchestra which almost bankrupted this tour and was sent home halfway through it. This tour is legendary as one of the most insane ideas ever from a rock band.  Emerson Lake & Palmer's ideas was generally well over the top and not particular profitable.

Despite of this, the band still manage to come up with a lot of good stuff on this tour and this double CD live album. They have even included some more old stuff like Pictures At An Exhibition. Most stuff here is from Works and not their greatest stuff, though. I still rate this live album though. I rate it to a three pointer.