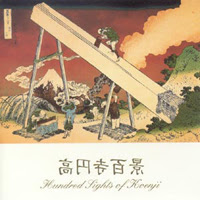 The debut album from these Japanese zeuhl mongers.

They make a great entre with the opening song Loss on this album. A song which very much sounds like Magma. The female operatic vocals and the hell of a racket the band makes in the background makes in the background announces Koenjihyakkei's intentions. This is hardcore zeuhl in the vein of Magma. A brilliant song, btw. It gave me a happy grin when I heard it the first time.

The rest of the album is much more varied and Koenjihyakkei takes a lot of influences from other sources than Magma too. Koenjihyakkei is also a much more adventerous than Magma too. They also includes some Middle-East music on this album. Something that feels a bit awkward and out of place on this album. Experimentations also sometimes means failure. This album is very much an experiement and one heck of a challenge. In particular for the listener who get treated to hyper-active music. Koenjihyakkei has often been described as Magma and zeuhl on caffeine. I do not disagree with that view after some spins of this album.

Strangely enough, the album has only been created by bass, drums, guitars and keyboards. That and a lot of voices like male and female opera vocals. That and some wild male and female chants. The sound is very big though and has this feeling of being created with a lot more instruments than "only" those instruments. It is fair to say that Koenjihyakkei has got the maximum out of their rather limited resources as Hundred Sights of Koenji is a heavy weight sumo wrestler. Where Magma used an army, Koenjihyakkei has gotten the same sound/result with merely a small band of brothers/sisters.

The music on Hundred Sights of Koenji is very colourful and fireworks like. Not everything here is great. But songs like Loss, Zoltan, Molavena and Gepek is brilliant though.

Koenjihyakkei has delivered a very challenging piece of music with this album. It is a very satisfying listening though and one I really like. I highly recommend this album to all zeuhl and avant-garde fans. Koenjihyakkei has just got a new fan in me.