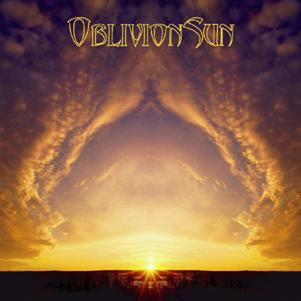 Oblivion Sun was founded on the ashes of the US eclectic prog band Happy The Man. I got all their albums, but have so far only listened to and reviewed their debut album. An album I really liked. Oblivion Sun is a different kettle of fish again, I have heard. Although, I am not so sure about that.

This is their debut album and they have just released their new, their second album. I also got that album, but I am starting with this album. An album that starts out as a breezy American heavy prog album with a lot of references to Eagles and Kansas. The two songs I am referring to;  Fanfare and The Ride is two very good songs with vocals and every trimmings possible.

Then this album is starting to really get interesting...... It take a sharp left turn and is heading into a landscape occupied by the symph prog and the fusion genre. The final half of this album offers up some great music in this landscape. A landscape I find a lot of Canterbury scene prog too. Still with an American outlook though. The final two tracks, the instrumentals Tales Of Young Whales and Golden Feast is two suberb tracks. They are two jazz tracks though. The band started out as an Eagles band, continued  through Kansas and ended up as Chick Corea forty five minutes later. Eclectic is the word I would use.

I am not sure if this is a very good or a great album. It has some great moments. But the leap from AOR to jazz is a big one in forty five minutes. I am giving this album a very good rating and highly recommends it. I am though more than willing to join their fanclub. This band has something special going for them. Keep it up !