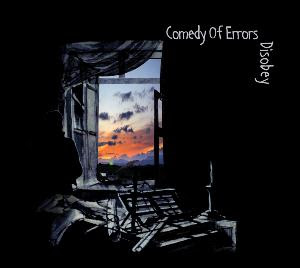 Comedy Of Errors is a local band (Glasgow, Scotland) and they have been in and around the Glasgow scene for the best part of 30 years. This is their second album. Their self titled debut album was released in 1988.

We are deep into neo-prog land anno the 1980s here. Marillion, Pallas, Pendragon, IQ..... the band has played with them all and they sounds like them. The vocals takes me back to the 1980s. The overall sound is not too bad though and the worst ills of the 1980s has thankfully been removed.
The instruments are the usual neo prog setup. Keyboards, guitars, bass, drums and vocals. Everything well excecuted.
The music is mainly songs orientated and not too technical or symphonic. The Could have been yesterday ballad is a typical 1980s neo prog standard and my imagination goes a bit awry when trying to imagine a vidoe for this song if EMI or the likes of that had released this album. I hope I will get a good night sleep, but I fear not. The Student Prince is a four piece suite, half an hour long concept track at the end of this album.

The music is good to very good throughout. I am by no means fan of the 1980s neo prog and I have noticed that the fans of that scene and sound really loves this album. And that is their audience and those who will love this album. I am not among them. This is a good album though and that is all I can say.