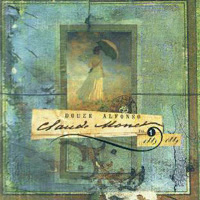 The third album from this very ambitious French band.

This is an hour long album about Claude Monet's life between 1883 and 1889. # 2 of this two albums series was released three years later.

XII Alfonso's music is a blend of French folk music and rock. Their music is conceptual as in trying to be grandeur and symphonic. But the music is basically pastoral folk music performed with a variety of instruments. Mostly guitars, keyboards, piano and some male and female vocals. Most of the music is acoustic though.

The music is elegant. Elegant, conceptual with narrations and pretty dull throughout. There is not really enough variations in the music to keep the listener interested. This is a problem XII Alfonso had on their previous two albums too. The art of song writing is not something they have grasped on neither this and the previous two albums.  That is a shame because I sympatize with the band and wish them all the best. Unfortunate, this is not a good album. It may be worth checking out, though.