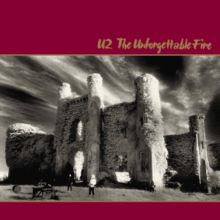 Once upon a time, U2 from Ireland was the best thing under the sun. They were the best band on this planet and they released two brilliant studio albums. This once upon a time was back in the 1980s.

I had not been listening to this album for over twenty five years before I put it on again some days ago. I hate the 1980s sound and decade with a passion. But this album has stood the test of time.

The Unforgettable Fire is the first of these two brilliant albums. It is their third studio album too after War and Boy. The excellent art work really describes this album pretty well. Both the music and the sound is dark and foreboding. Edge's guitars has a special time-delayed echo sound nobody has copied. He also discovered it by sheer accident and has kept it on. The riff on Pride is one of the best and most iconic guitar riffs ever to come out of this planet. Pride, the second song on this album, is a truly brilliant song.

The U2 drums, bass, guitars and vocals setup gets support from some keyboards and more orchestral instruments on this album. Instruments that adds a lot of excellent new textures to U2s music.

The songs on this album is all twisted and nowhere near straight forward. There are some shorter interlude like songs too which is very twisted. As an entity, this album is brilliant with stunning, brilliant songs which resonates even in 2012. It is also one of the greatest albums from the last fifty years and it will now be moved from a dark box to my living room. It will not be twenty five years to I listen to this album again. Make it more like twenty five days 'till next time.