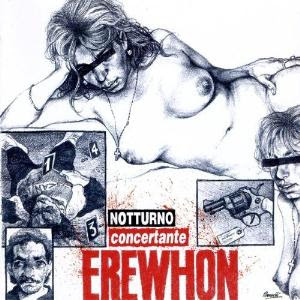 A band from Italy with their second album.

Notturno Concertante is listed as a prog rock band and I was looking forward to some Yes/Genesis/ELP kind of music. That is not what I got.
The music here is rooted in the 1990s and is a mix of metal and rock, intervowen with some soundtrack like music and piano interludes. The band has tried to make an art rock album, but has failed. I do not really know  which label I should put on the music on this album. Pseudo-art rock ? That's the label.

The sound is pretty horrible. In particular the guitar sound which sounds very plastic like to me. The vocals is though the worst part of this album. Some of them are pretty much in the back of the sound. It is like the band is trying to hide them, the weakest link on this album. And the vocals are truly awful. The overall quality of the songs are pretty abysmal too. After some listening sessions, I am more annoyed than anything else. This album is that bad.

When music starts to annoys you, you know you got a bad album. And this is a bad album which I have nothing good to say about. Avoid.