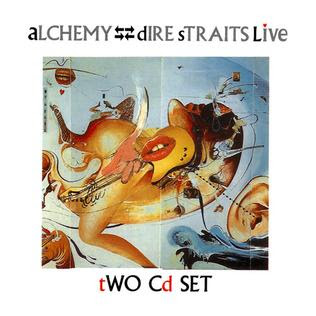 Dire Straits is a pretty controversial band. They personified everything that was wrong with the 1980s and the first half of the 1990s. The plastic fantastic society where everything real was replaced with cheap plastic imitations. Watching a live video with this band is not recommended. So I am closing my eyes and is concentrating my mind on their best music. The Making Movies to half of the Brothers In Arms album. Love Over Gold is an excellent album.

Alchemy is a two CDs/LPs live album and it was a recording of the tour following the Love Over Gold album. Thankfully, this live album is based on that album and most of Making Movies. That and the Local Hero soundtrack Mark Knofler did. The light hearted cheesy songs, which marred their later career, is omitted from this album and all cheese haters, myself included, can safely listen to this album without becoming sick.

Mark Knofler's guitar playing is outstanding on this album. The rest of the band is also great. But Mark Knofler is the star here. The sound is great too. This album also include excellent tracks like Tunnel Of Love, Romeo & Juliet, Private Investigations and Telegraph Road. There are also some pretty good songs here too. But I can listen to those above mentioned songs all night.

In my view; this is a great live album and one of the standards in my music collection. One album I really cherish. The last really great Dire Straits output before they were swallowed by an ocean of cheese.