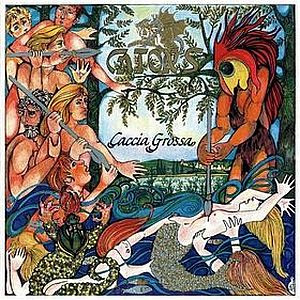 The third album from this Italian band whose name and music I was not aware of until I accidently stumbled across their album and bought it for a few pennies because I like Italian music.

This band has been lumped into this Italian symphonic prog movement (Banco, PFM etc etc) by many progressive rock resources. With some justification, I have to say. But Aton's very much do their own style. A style that also takes in the likes of Dire Strait, Tears For Fears and some jazz. That in addition to progressive rock. And yes, this album is a progressive rock album and it really looks forward to the next millenium. It is a very refreshing album and I almost burnt my favorite shirt to crumbs when both ironing some shirts and listening to this album for the first time. The opening songs of this album sounds as fresh as freshly delivered vegetables directly from the farm fields. Hence, my favorite shirt had a very lucky escape.

A very fresh and engaging product, that is what I will remember this album for. The guitars are brilliant and so is the keyboards, bass and drums too. But they are all trumped by the excellent vocals.

All the songs are great. Not in top class and a couple of killer tracks would had elevated this album to a greater height. But I really enjoy this album and forgive it for not having the top material. I will surely check out Aton's a lot more after this introduction to their music. I think they released six albums and I will get the albums I am missing. That unless Ebay is charging insane prices for them.

A great album and as fresh as tomatoes directly from the farmer.