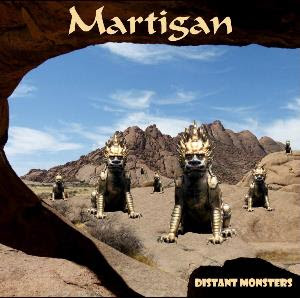 Martigan is a five piece band with a lineup of guitars, synths, bass, drums and English vocals.

Until I started my research on this album, I thought I had reviewed a couple of their previous albums. But I neither own them or has reviewed them. Which is a shame and a personal loss as this band is a good band.

We are back in the German neo-prog scene. A very good scene. Something due to, amongst others, the contributions from this band.

The music here is mostly guitars dominated neo-prog in the same vein as Pendragon, RPWL and Argos. You can also add a lot of Saga here too. Saga is very popular band in Germany and Scandinavia. There is a lot of their DNA profile in both the Scandinavian and German neo-prog scene. This album is no exception from that rule.

The songs here are mostly pretty dark. Something Kai Markworth's vocals can be given credit for. His vocals are very good...... and dark.

The album is seventy-five minutes long and offers good value for money. I am not happy about that synth sound. But the guitars are far better and very good. Ditto for the rest of the sound.