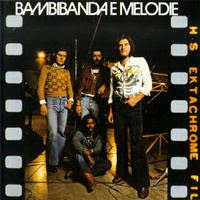 The band was a four piece band with a lineup of guitars, bass, percussions, drums, keyboards and vocals. Italian vocals.

When I state that this is the one and only album from them, I have heard they released another album in the 1980s too. A pop album. The leader (& guitarist, vocalist) of this band, Bambi Fossati, has also been very much involved in Garybaldi.

This album is a bit of an odd album. It is very rhythm focused. The percussions and the drums are very much in the forefront here.

That says, the music is a mix of Caribeen steel music, space rock and jazz. It also feels like an instrumental post rock album thirty years before someone invented this genre. Post rock fans will love the first half of this album. The same goes for krautrock fans as there is a lot of Agitation Free influenced music.

Most of this album is instrumental. The first half, that is. The second part is still very much rhythm focused. But there are some blues here too and some hard rock. There is also some vocals too.

The end result is a rather special and intriguing album where the first half of this forty-two minutes long album is very good and the rest is in the decent to good bag of goodies.

It is most definate well worth checking out this album as it has some charm and a lot of style. A lot of class too.