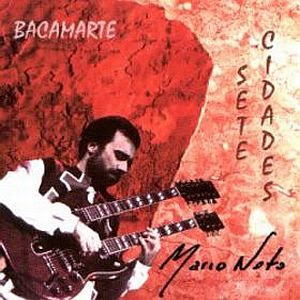 This is actually a solo album from their guitarist Mario Nete, who does all instruments here. Drums, percussions, keyboards, flutes, vocals, piano, bass and guitars.

I very much liked the Bacamarte debut/only album Depois Do Fin. A great symphonic prog album with a lot of local folk music thrown in. That album is among the five best ever progressive rock albums from South America and a must have album.

I reviewed that album for ProgArchives back in August 2009.

Mario Nete is keeping that Bacamarte name as the name of the record label and his album. I can understand why.

Sete Cidades is a thirty-eight minutes long album in the same vein as the 1983 album. There is still a lot of Premiata Forneria Marconi (PFM) influences in this album. A lot of RPI influences from the likes of Banco too. Add a lot of South American folk music and symphonic prog to the mix too and you get the result.

Some of the guitars and sound reminds me a lot of Al Di Meola. There is a lot of Spanish guitars here and Latin American guitar picking.

The music has a very strong South American feel and most of the music is very good. This album does not shame the Bacemarte name. It is indeed a very good addition to Depois Do Fin and a great addition to anyone's record collection.