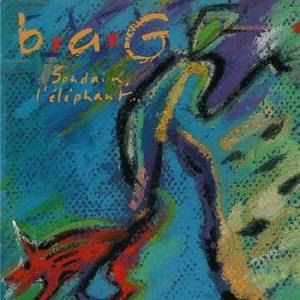 The band came from the Bretagne area and they were a five piece band. Their lineup was bass, keyboards, drums, bombarde, crumhorn, guitars, drums, flute and saxophone.

The music on this fifty-five minutes long album is all instrumental.

It is not too difficult to pinpoint their location to Bretagne as the band is very much rooted in their folk music scene. Lots of folk music can be found here.

Take jazz too and add that into the mix. Add some avant-garde rock, chamber rock and even some zeuhl into the mix too.

The music is eclectic to say at least. Eclectic but still melodic. Melodic and jazzy.

I guess the label on this album is "fusion with folk music influences".

The sound is great and the music is fresh and contemporary. There is not much of the dreaded 1990s here. The music is indeed timeless and it has a great deal of originality and it's own style.

Fifty-five minutes of instrumental music on the slightly anonymous side of the spectrum is a bit too much for most of us. There is no great pieces of music here. But the music is not bad either and this album deserves a lot of credit for it's originality. Hence my verdict.