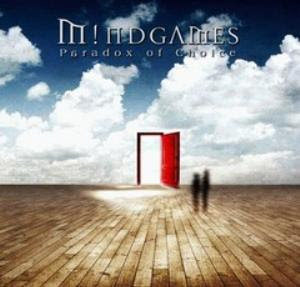 The fourth album from this Belgium band.

Mindgames is a five piece band with a lineup of guitars, keyboards, synths, bass, drums and vocals. Male English vocals.

I quite liked their 2010 album, their third album MMX. Good traditional neo-prog in the Pendragon vein.

Mindgames has continued in the same vein on their new....well, 2015 album Paradox Of Choice. This is very much old Pendragon. The vocals are pretty thin and not that powerful. But it really suits this music.

This exactly one hour long and twenty-two seconds long album is divided into nine songs. There is no real epics here and the music is a bit on the songs orientated end of the neo-prog scene.

There is some long guitar solos and some guitar harmonies on this album. A lot of keyboards too. Traditional neo-prog, in other words. This album is like a return to the 1990s. Retro neo-prog ? Oh yes.....

There is no really great tracks here. This album is not that good either. The art of any good or even great song writing has passed by this album. It is a bit of a step back from MMX and I am not that impressed. This is a decent to good album. It is also a pretty dull album too. I really like neo-prog. But not really this album.