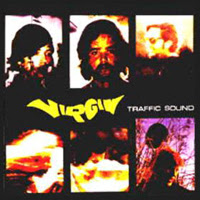 The debut album from this band from Peru. A band who released three albums before they broke up.
All of them reviewed/to be reviewed here in this blog.

Traffic Sound was a six piece band with a wide array of instruments. From guitars to woodwinds, bass, drums, vibraphone, organ, piano and English vocals.

This half an hour long album has a surprisingly good sound. Good enough sound to really convey the psychedelic rock on this album. An album which sadly is also a bit of a mishmash between live sounding songs with audience and proper studio songs.

Peru is on the western side of South America and this album sounds like it has been spat out of the hippie scene in California. A song like Simple is....... well, simple. A good pop song. There are also some pretty good rhythmic and some more complex songs here.

The end result is a decent album which sounds a bit dated. It also very much feels like a debut album where everything old and historical songs are thrown into this album. Check them out of old style psychedelic rock is your thing.