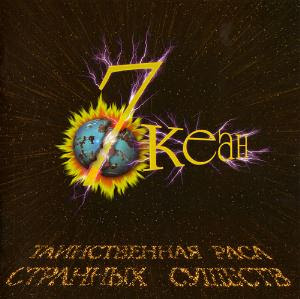 The debut album from this Belorus band.

7 Ocean is a three piece band with a lineup of keyboards, drums, bass, guitars and Russian male vocals. They have so far released four albums and is listed as a symphonic prog band in ProgArchives. This is why I got this album.

I guess that label is justified based on their other albums because it is hard to come by any symphonic prog on this album. There is hardly any of that here.

What we get here is eccentric, eclectic Belorussian/Russian rock. The popular music & culture in the ex USSR is much more eclectic than here in the west. This album is a good example.

The music goes from avant-garde to folk, jazz, symph prog and pop on this album. A strong piano present always takes the music towards prog rock. The vocals drags us towards avant-garde and pop music.

This could had been a very interesting album if there had been any great or even good songs here. There are none. The album is chugging away throughout it's eighty minutes. Which is far, far too long for an album like this. The end result is a decent album and nothing more than that. Less is more should be what this band should aim for.