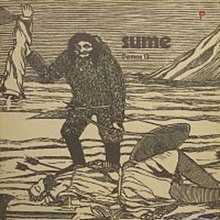 The first of two album from this Greenland band. An Inuit band, no less.

This album was bought by 20 % of the population in Greenland and had an immense importance for the Greenlandic independence cause in Greenland. This vast island, the biggest island in the world, is being ruled by Denmark. This band wanted independence. Something they expressed in their local language (inuit ?) on this album.

The music is pretty much basic psychedelic rock and folk prog. We get the full treatment with saxophones, guitars, bass, drums, harmonica, flutes and vocals. The sound is good and the music is pretty passable for those into US rock too. A bit of Jefferson Airplane sneaks in here and there.

This is a decent album which has also spawned a new movie about this band and album. Not bad at all !