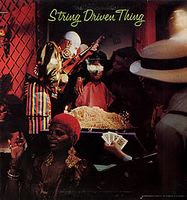 The second album from this Glaswegian (UK) band.

Their self titled debut album did not set the world alight so they gave it another shot with another self titled album. Confusing ? Oh, yeah.

String Driven Thing emerged with the growing folk rock scene and is said to have had an immense contribution to the progressive rock scene. This four piece band had a lineup of viola, violin, banjo, bass, guitars, percussions and both male and female vocals. The latter ones from Mr and Mrs Adams.

Mr Adams, Chris Adams, was the founding member of the band and is still the mainstay of the band. The band is still on and off active as a hobby project. Or old age pensioner project as it is these days.

There is not much gentle pensioner and free bus passes in this album, though. An album which sparks off as a wild horse with the opening song Circus. A song that both includes a lot of references to pub rock and David Bowie's more arty rock. I think the band has stolen one of David Bowie's riffs on that song. Or is it the other way around ? Fair enough.....

The album settles down into a much more traditional folk rock album after the opening salvo. The band is not as brilliant as Fairport Convention. Nevertheless, this album and the band is really onto something on this good album. An album with the Glaswegian devil-may-care attitude.

This is a good album I would recommend to everyone.