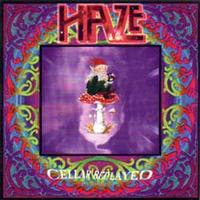 The second album from these British neo-proggers.

Haze was a three piece with keyboards, guitars, bass, drums and vocals. The usual neo-prog lineup.

I was a not a fan of their 1984 debut album C'est La Vie and they have not improved much on the follow up album either.

The sound is pretty bad and the music is not much better. The band has also stolen a couple of Genesis melodies and incorporated them into their own songs. The music is very generic and not particular interesting.

In short; this is almost a turkey. A couple of decent tracks elevates this album a bit.