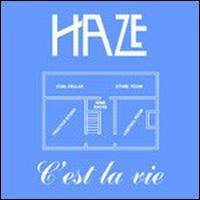 The debut album from this British album.

Haze was one of the very first neo-prog bands to appear in the UK and in this genre. Their career was ......... ehh......... sporadic to say at least. They were and still is very much an underground act in an underground genre. It did not help them much that they changed their name to World Turtle on two albums. More about that on the reviews of those two albums.

The band was a three piece on this album. Keyboards, guitars, bass, drums and vocals. The usual lineup.

The music is everywhere. From new romantics (Duran Duran & co) to a bit more pop-rock like songs and some epics like songs.

The vocals are good and some of the music is not bad either. The live tracks here are not impressive. This is not a good debut album and I find very few good things to say about it. It is not a hopeless affair though. The band soon reappeared with their second album.