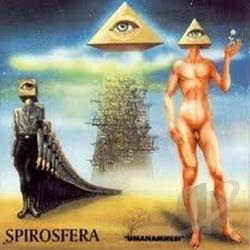 This four piece band came, released an album and failed to set the world alight. Therefore; they left again.

Their lineup was drums, bass, guitars, keyboards and Italian vocals. Their music was not neo-prog. Instead, they went in a much more avant-garde direction. Take a large chunk of Area and add some more avant-garde with some chiming saxophones, although they are not listed among their instruments. But they are here and very much present on this album. An hour long album.

The sound is not too bad. But the ideas is all over the place and pretty chaotic. The music is pretty chaotic and not worked through. This album is annoying in that respect. I really like this album when it is drawing quite heavy on the Area influences. The more wilder avant-garde chaos leaves me cold.

This is a decent album and nothing more than that.