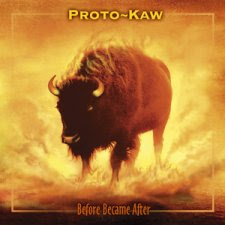 The band was a six piece band on this album with a lineup of bass, drums, piano, keyboards, organ, flutes, guitars, saxophone and vocals.

Proto-Kaw is the Kansas founder Kerry Livgren's band... or was as the band is probably disbanded after Kerry Livgren's stroke which means he no longer can play music. They released three albums. All to be reviewed/has been reviewed in this blog.

Proto-Kaw was also Kansas before they broke up and reformed again with a new setup... the Steve Walsh setup which made Kansas famous. Proto-Kaw means "the original Kansas" as Kaw is the indian name for Kansas. Clever, Kerry Livgren.....

The songs here are a mix of original Kansas material pre-Steve Walsh. The one that did not make any success at all. Then there are some new material too. All of this written by Kerry Livgren.

The material is off course influenced by the second incarnation of Kansas. Kerry Livgren wrote music for both versions of Kansas and it goes without saying that there are pretty strong similarities.
The difference, and it is a major difference, is that Proto-Kaw uses flutes and saxophone where Kansas is using violin.

Proto-Kaw's music is not as harsh and country'n'western as Kansas was. There is some AOR here too and a lot of elegant music. Pomp prog springs to mind as a label. It is still symphonic prog too by all means. But in the US way.

This album is eighty minutes long and the quality is good throughout. Very good at times. But there is a couple of tracks I don't care about.

It is great that we got both Kansas and Proto-Kaw. And we should all be grateful for that. Thank you, Kerry Livgren.