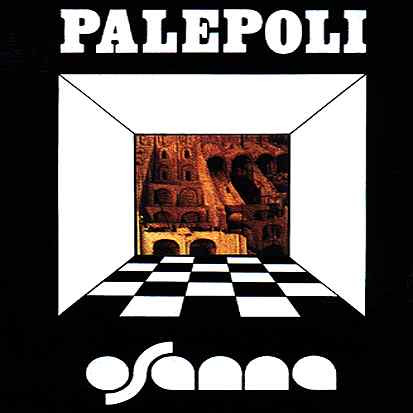 The band was a five piece band on this album with a lineup of woodwinds, bass, drums, guitars, vibraphone, Mellotron, organ, piano and Italian vocals.

Palepoli is the album which has put Osanna on the map. Both the RPI and the world wide progressive rock map. It is mentioned among the best albums from PFM and Banco Del Soccorso.

Palepoli is also a very difficult album to get below the skin of. There is a myriad of genres and musical expressions on this album.

Avant garde prog, avant garde jazz, RPI, heavy prog, blues, jazz, crossover prog, symphonic prog, eclectic prog........ you get all of it on this forty-two minutes and three tracks long album. That and some masculine and at times; screaming vocals.

The sound is typical early 1970s and the band takes no prisoners on this mad, mad album.

But there is solid method and order in this chaos. There are some great Mellotron parts here and a lot of very good ideas and melody parts. This despite of the chaos.

This album deserve it's "classic RPI album" status although I would not give it full score. It is a very good album though which showcases the mad and very innovative 1970s in the Italian progressive rock scene. It is a recommended album.