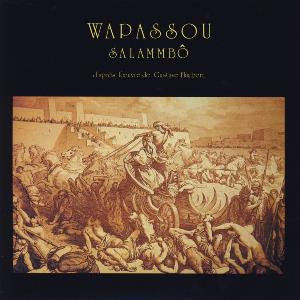 The band had released a couple of very good albums before they started this venture, this album, as a trio. A trio with a lineup of keyboards, guitars and violins.  That in addition to some vocals.

This is very much a stripped down version of this band. A band in the RIO/avant-garde genre. And very much so. The band did not use any drums or any bass on their first three-four albums. The keyboards doubled up as rhythm instruments.

Their last album was a Latin mass like album. The band is continuing this theme on this album too. A thirty-seven minutes long album divided on two similar lenght pieces of music.

This is very much avant-garde music. Music which is pretty slow and dirge like. Almost like a funeral dirge at times. The instruments complements each other and the tempo is at best/fastest middle-tempo. Mostly, this is slow tempo music.

There is not much life or light on this album. A couple of organ sounding keyboards solos is the sole sign of life here. This album is not terrible interesting. Or not to mention; good. It is a rather decent album and one it does not take long before it is becoming tiring. Hence my rating of this album.