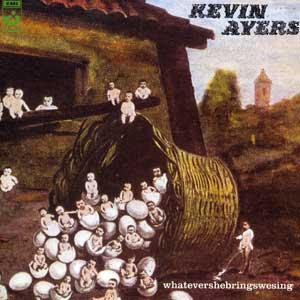 The third album from this eccentric English legend.

Kevin Ayers started out in Soft Machine and played on their first album. Then he went his own way on a quite successful solo career.

Kevin Ayers vocals is the bearing element on this album. An album which neatly fits into the weird psychedelic pop/rock genre. Most of the songs are clearly very folk rock influenced and with a strong west coast of US flavour. Still with a very strong psychedelic vibe.

Kevin Ayers vocals are pretty weird. The lyrics are very weird. There are a strong vaudeville and circus vibe over the whole thirty odd minutes long album. There are also some more or less hidden avant-garde elements throughout this album.

In the middle of all this, the songs are good throughout. The songs are short and strange at the same time. But still, good.

This is a good album in it's weird eccentricity. And I can understand why Kevin Ayers was held in such high esteem. Check out this album to get Kevin Ayers and his world.