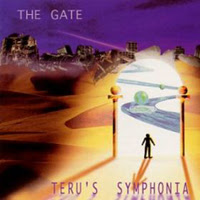 The so far final album from this Japanese band.

The band was again a five piece band with a lineup of guitars, keyboards, bass, drums and female Japanese vocals.

This band, one of the best one ever to come out of Japan, released seven albums before they gave up the ghost. All of the albums before prog rock again became fashionable. I wonder what today's US and European scene would have made of this album.... It would probably have sold a lot more copies than it did back in those hard days.

This album is bombastic and pretty hard. The band had moved towards neo-prog now. This is indeed a symphonic neo-prog album. There is also some vaudeville and some theatrical stuff here.

The vocals are very good and one of the best parts of this album. The music sounds a bit generic. It also sounds a bit too gothic for my liking. Nevertheless, this fifty minutes long album has a lot of good songs. All the ten songs are good here.

This is a good album which I would recommend as it is one of the better Japanese albums out there.