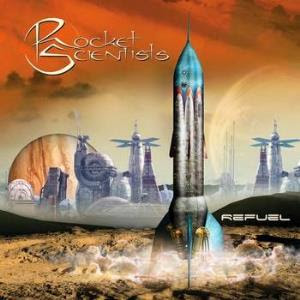 Rocket Scientists was Erik Norlander's first band. Their debut album was released back in 1993. The band has then sporadic released studio and live albums.

This band excists between the symph prog ideas of Erik Norlander and the more pop songs ideas of Mark McCrite. Don Schiff on bass completes this band. This album also has a lot of guest musicians and a wide variety of instruments. Strings, drums, woodwinds, guitars, bass and keyboards.

The Rocket Scientists albums tends to wildly vary between symph prog and more pop orientated material. It is obvious that Mark has come up with most stuff on this album as the album is very much leaning towards songs orientated neo-prog, AOR and pop music.

There is some symphonic prog here too. Some of the music is very complex indeed. But the majority of this one hour long album is very much songs based and very poppy. The songs got catchy verses, hooks and choruses.

The musicians does a great job indeed. Ditto for the many vocalists. But this album is too songs orientated for my liking. Nevertheless, this is a good album which will greatly appeal to most people.