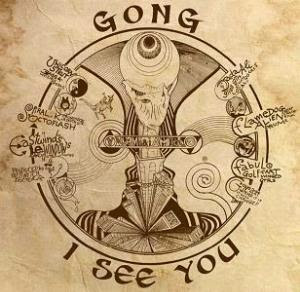 The twenty-third album from this legendary band. A band who has lived a life under various leaderships and constellations. Daevid Allen was out of the band for many years and albums before he re-joined the band again and took up the reins of this horse.

The anarchistic, hippie and plainly weird version of Gong is back again and has been together for many albums now. I have not a bad word to say about Pierre Moerlin as I really liked his albums with Gong. But what we get on this album is the real deal in my view.

Those who loved the early 1970s Gong will lap up everything on this album with a great deal of gratitude. I was not a big fan of Daevid Allen's early version of Gong. Maybe I have moved on because I really like his weirdness now. This album is really, really weird with a mix of space rock, naive pop, psychedelic trips and jazz. Gilli Smith shows up with her space whispers. Daevid Allen does the vocals and some guitars. The new kid on the avant-garde prog block, Kavus Tobabi from Knifeworld is also doing the guitars here. There is sax and flutes here in addition to computer programming, drums and bass. Orlando Allen is also contributing on his father and mother (Gilli Smyth)'s album. This is a family affair, in many respect. Will he take over the Gong name ?

The end result is a weird and very good album which is up there among the better Gong albums. It is really an album I like because of it's musical qualities and the smiles it brings on my face. The songs are mostly very good too. The band is touring now and this band is by no means dead and a museum piece. They are alive and kicking like a horse on various herbs on this album.