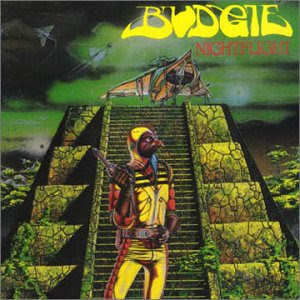 The ninth album from this strange Welsh band. Strange because their albums has been an eclectic mix of psychedelic, boogie and heavy metal.

We are in 1981 and Iron Maiden turned the world upside down with their self titled album the year before, in 1980. Budgie was again a power trio as they had been throughout and also showed that they could boogie too.

And boogie is what this is is. Hard rocking boogie with lots of melodies and heaviness. A trio with bass, drums, guitars and vocals can make a heck of a racket. Which is exactly what Budgie does here.

The difference between this album and the pretty bad Power Supply album from 1980 is that Budgie is much more true to their own roots on this album, NightFlight. The band is both looking forward and back to their past.

The result is a pretty good album which has a couple of good songs and a good ambience throughout. It is an album which makes me forget the Power Supply album. It is a good album. Check it out.