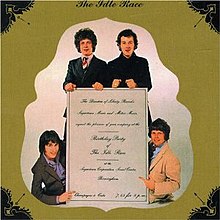 The Idle Race is mostly, if not only known, as Jeff Lynne's first band. I believe this is also the first album he was ever involved in.

We can already here see the main themes in Jeff Lynne's creative outputs. Quirky psychedelic pop with a lot of melody and a lot of The Beatles influences. This album is very much an English eccentric album. It is a short album and it was released with a lineup of guitars, bass, drums and Jeff Lynne's vocals. His vocals is great here.

This album is twenty-eight minutes long/short. The title track is very quirky and as eccentric as it gets. The rest of the album has some rather normal psychedelic pop tunes in the vein of The Beatles. The early germs of Electric Light Orchestra is very much in attendance here.

I find myself, to my surprise, enjoying this album. Not everything is good here. But several of the songs here are indeed good songs. I would rate it somewhere between decent and good. Fans of Jeff Lynne must get this album.