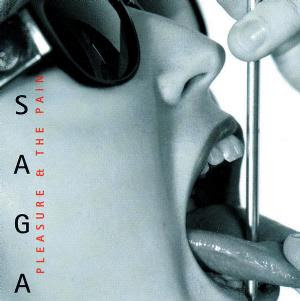 This album title perfectly describe how it is to be a fan, or even remotely interested in this Canadian band. Saga has released some really great albums, intertwined with some really painfully bad albums too. One great album was more often than not followed by a terrible bad album before a new great album followed. Mountains high; rivers deep. That is Saga in a nutshell.

In the case of this album, we are talking pain and the bottom of a deep river. The disturbing, off putting cover on this album should really scare off every potential buyers too. But in case anyone take a peek past it, what awaits the listener on album is even more disturbing than the picture. Some very bad versions of old songs and a horror version of Beatles classic song Taxman is what I would describe as pain. The techno house and disco rhythms on some tracks are painful beyond comprehension. What the heck was this band thinking about ?

This is a truly awful album without any redeeming features whatsoever and it is best avoided at all costs.