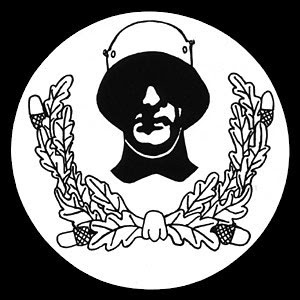 The cover art work on this album and the song titles may give the unaware buyer that German Oak is a nazi-band and this album is full of nazi music. Nothing could be further from the truth though. But I am not displaying this LP in my living room, though. I got enough problems with my girlfriend as it is.

The music is deeply disturbing as it is. It is music about being bombed to death by bombers in the skies above and the general horrors of war. It is an album where the band does not portion any blame on the Axis or the Allies. If you get tonnes of bombs in your head, you really do not care anyway.

This album was also recorded in an ex air raid shelter in Dusseldorf. That explains the sound which is pretty bad. But it is the right sound for this music.

The music is dark space rock. Mostly claustrophobic dark. Dark as in recorded in a disused airraid shelter where thousands were scared witless during the war. The instrumental music is performed with guitars, organs, bass and drums.

This music is so dark it takes time to sink in. I have spent a lot of time on this album. Although this album is by no means a masterpiece or even a great album, it really works and it is a good album. It really have some good melody lines too. I give it a weak three pointer because of that.