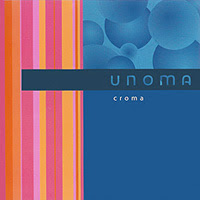 Unoma was the creative vehicle of the guitarist and composer Fidel Vazquez. He was helped out by bass, keyboards, vocals and a drum machine on this album.

Fidel is from Barcelona and he was influenced by the usual suspects. From Genesis and King Crimson to Dream Theater. He also got a music education in a local university where he met the guys who plays on this album.

The end result when it comes to this album is thirty minutes of instrumental music and ten minutes of vocals based music at the end of this album.

The half an hour with instrumental music is a mix of guitar and keyboards solos and melody lines. Take a lot of Camel and mix it with some jazz. There is also some pretty large Spanish music influences here.

The music is at times as interesting as watching paint dry. There are some very sporadic hints of inspirations and life here. But they are hard to come by.

The album only comes a bit to life when the vocalist Alex Warner graces this album on the last ten minutes. The result is some sort of a power ballad which is not too bad. It does raise the standard a bit.

An album saved by commercial pop and power ballad....... I never thought I would ever mean or write that. But the pop here is pretty good.