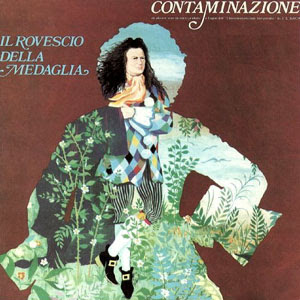 Il Rovescio Delle Medaglia has recently made a bit of a comeback and has been touring. Their last album was released six years ago, back in 2010. That is all I know about this band who were not one of the RPI greats back in their golden days, but were bubbling under in the second division of the many bands from Italy and in that scene.

On this album, their most well known and loved album, they were a five piece band with keyboards, flutes, guitars, bass, drums and Italian vocals. There was also a fully blown classical music orchestra involved on this album.

The music is pretty hard and pastoral at the same time. The keyboards are absolute brilliant here and takes us back four hundred years. The pieces of music here varies between harsh and pastoral. A bit like pop and a bit like hard rock. A lot like classical music at times, too.

This forty-two minutes long album is one of the classics in the RPI scene. It is also one of the boldest and most complex albums from that scene. It offers up some great melodies and great vocals. My only gripe is the lack of a truly superb piece of music. Besides of this small gripe, this is a great album which will forever stand the test of time.