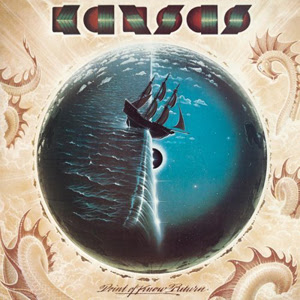 Kansas does not need any introduction. Their mix of Americana and English symphonic prog is one of the soundtracks of the 1970s.

The band was a six piece here with a lineup of violins, bass, drums, piano, guitars and synth/organs.

This album was a departure from their previous album Leftovertures and a return to a much more harder AOR sound. The band caught up with the AOR scene again with this album and the album sold very well.

The introduction of synth is not a good thing here. It dilutes their very good sound and music. There are a couple of cringeworthy songs here. But their trademark sound is still present here and that is an excellent sound indeed.

They also got a big hit on this album with the ballad Dust In The Wind. A very good song. The best song on this album though is the title track.

The end result is a good Kansas album which is not right up there with their best albums. But still... a good album.