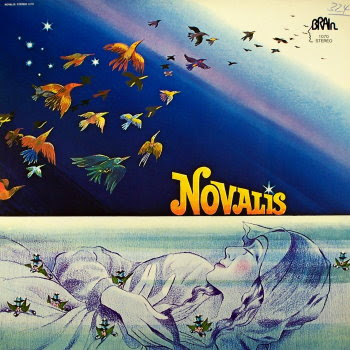 This band was a five piece band on this album with a lineup of keyboards, bass, drums, guitars and vocals. German vocals, thankfully.

This is one of the German bands who were operating just below the surface without really getting a big breakthrough. In this respect and in many other respects, they can be compared with Wallenstein. Novalis had a good following though.

German bands means krautrock in many eyes and ears. But Germany also had a big and very productive symphonic prog rock scene too. Novalis is a product of that scene.

Novalis does symphonic prog on their own terms, though. The first two tracks on this five tracks album has got a very nice Hammond organ who sounds like a church organ here.

The opening track Sonnengeflecht is a good track with some good synths. It makes me believe we are in for something great here.

The final three tracks is much more a mix of symphonic prog and space rock. Symphonic krautrock ? I feel that is a very good label for this album. A very good album who does not fully completes the distance. I really like this band and this thirty-five minutes long album.