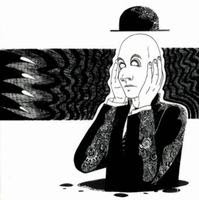 Pangea was not really a band. It was a name the producer Mauro Paoluzzi put on his own solo album. He was joined by two Madrugada members in Pangea and that made it a band.

Mauro Paoluzzi was pretty heavy involved in the Italian jazz/fusion scene. That again is not particular evident on this strange album. An album that covers a lot of bases. From space rock, avant-garde prog to Italian symphonic prog, eclectic prog, Italian folk rock to fusion. There is a lot of strange things going on here at this fifty minutes long album.

The album is created with flutes, Italian vocals, guitars, keyboards, bass, drums and saxophones. The vocals are good.

The album opens with some symphonic prog before it goes into avant-garde, space rock and folk rock. These changes happens all the time. This album never really settles down into one music style. It is like a small child not being able to keep the concentration level steady enough to concentrate on one toy. It has to race around the playhouse and try everything at the same time. That is a pretty good summary of this album.

That makes this album a pretty interesting album. Interested and pretty fragmented. Unfortunate without having a really great track. It is a very good album though and one I really like. Check it out if you can.