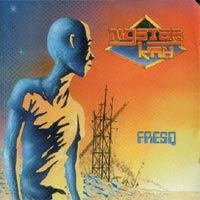 The so far only sign of life from this French trio.

During the last five to ten years, we have seen the emergence of a great female vocals fronted neo-prog scene here in the UK. Bands like The Reasoning, Touchstones, Panic Room etc etc... I really like that scene. This French band were perhaps unlucky that their album were released before the real commercial breakthrough of that scene.

Speaking of music, Mysterkah plays a pretty standard version of crossover and neo prog. The vocalist Yleah White has a very good voice. She is also supposedly Norwegian. I don't know. Her vocals is backed up with keyboards, guitars, bass and drums. The guitars are a bit chugging and the band drifts into prog metal now and then. But the music is mostly neo prog with Ms. White's vocals and vocals harmonies in the front of the mix.

The end result is a good seventy minutes long album which does not really shine like a star. It should be a pretty obvious purchase for those of you into female vocals as Ms. White have a very good voice. Check it out.