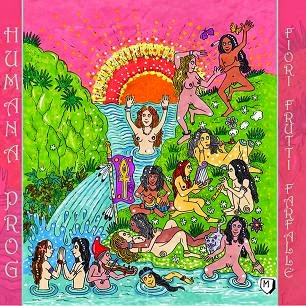 The debut album from this Italian band/project.

Well, some sort of debut, it is not. This is Paolo Farina from the old Italian prog rock band Maxophone, whose self titled 1975 album is a semi-classic album from that scene. Paolo has got another Maxophone member with him plus a very long list of other musicians on this album where he is doing the vocals himself. He get help from flutes, drums, guitars, bass and numerous other instruments. His vocals is great, btw despite of his advanced age. He sounds like half of his age. Well done, Paolo !

I am not sure if Humana Prog is in the same direction at Maxophone though. The music on this album is as the flowery art work would suggest rather flowery as in folky and with a lot of old style Italian pop and rock. The music is both folk rock dominated and a bit soft. Yes, with some pop music too. The music is very much in the Italian prog rock mainstream from the 1970s too. It is a retro album as the cover art work suggests.

The music is very flowery and warm. It also has a great deal of Latin coolness in these forty-five minutes it lasts. The sound is excellent and a great update on the 1970s Italian sound. The flutes and the acoustic guitars are great together with the Italian vocals.

There is a distinct lack of any really great songs here. That is my only gripe with this album. An album I fear will be the one and only album from this project. It is nevertheless a very good album which is an obligatory purchase for anyone into Italian progressive rock.