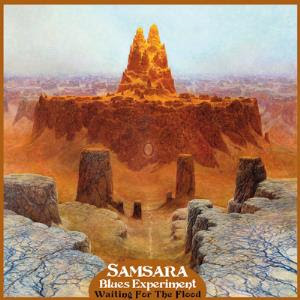 The third and so far the latest album from this German band.

The band was a quartet with a lineup of guitars, bass, drums, moog, sitar and harp.

Samsara Blues Experiment is a band in the sludge core and space rock genre. Their debt to Black Sabbath and the many Hellhound Records bands. St Vitus springs to mind.

The music on this fifty minutes long album is divided into four songs. All of them over ten minutes long.

I have reviewed their first two albums and I have liked them. But three albums with the same music.... Well, that is wrong. The subtle introduction of moog, voice effects, harp and sitar gives a couple of songs an Asian and Middle East flavour. The songs is also a bit more varied and not in this all out sludge and space rock assault.

When that is said, this album is very hard and not easy-listening. Very hard and metallic at times. But there are some subtle changes and developments on this album I did not find on their previous two albums.

This album is though an aural assault on the ears and the other senses. It is also very much spaced out. The song structures is pretty good throughout. But this is not a commercial sounding album. Not by any means.

My main gripe is the lack of any great songs. There is no great songs here and a couple of the songs are also a bit substandard. This is still a band I will keep an eye on and I will still get their albums if they are still alive and well. This album though is a good album.