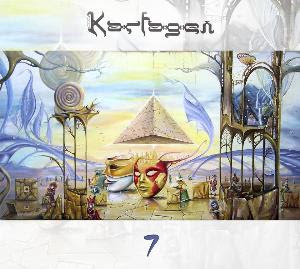 The seventh studio album from this Ukraine band.

The band is now touring quite extensive in Europe together with Sunchild and it seems like Karfagen is on everybodys lips these days. Which is just what the band deserves.

Karfagen is Antony Kalugin with four other musicians on this album. A bit slimmed down and a more touring friendly band. The lineup is male and female vocals, bass, keyboards, drums, percussions and guitars.

The half an hour long Seven Gates is the main composition on this fifty-two minutes long album. A good and pretty dynamic piece of music. A piece of music which very much highlights the development of this band from album # 1 to this album.

In the beginning, this band was all about Antony Kalugin and his keyboards. Most, if not all, of the music was instrumental. This is no longer the case on 7.

There is a strong, very strong element of neo-prog on this album. This has made Karfagen a lot more accessible and a lot better too.

Besides of the vocals, there is still a lot of instrumental stuff too. Stuff where the composer Antony Kalugin can really make something special. Which he sporadic does. Not all on this album and on the previous albums has been good. But this gives Karfagen their own identity and their own space in the prog rock scene & heaven.

This album is a good album from a band who can rightly be regarded as one of the better prog rock bands from Europe right now. My only gripe with this album is the lack of any great songs and pieces of music. That aside, the band has won me over.