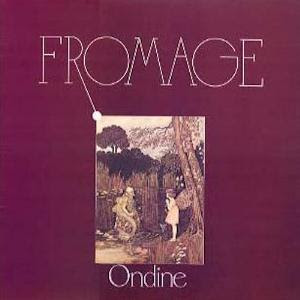 This band released all in all two albums. Ophelia, their second album, was released in 1988. That is the last thing we have ever heard about this band.

Fromage was a five piece band on this album with a lineup of bass, guitars, keyboards, drums, flutes and Japanese vocals.

That said, there are some hints of symphonic prog here. Strong hints. But most of the music is pretty much straight forward neo-prog, the Japanese way.

The vocals, as always with Japanese vocalists, are an acquired taste. I will probably never become a fan of this thin type of vocals. I prefer my vocals with a lot more meat on the bones. A lot more beefy.

The flutes here are very good and so are the guitars and keyboards.

The music too is good. There is no great songs on this fifty-four minutes long album. But it is still one of the better Japanese albums I have ever heard. And I will now try to get their second album as I guess that one is a really gem of an album.

Ondine though is a good album and well worth checking out.