Looking Glass Lantern - The Hound Of The Baskervilles (2014) 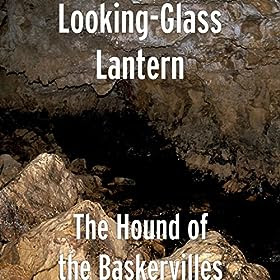 The second album from this project who is the creative vehicle of Graham Dunnington from England. I believe he does everything on this album too. A one man band.

We are in soft symphonic prog land. That comes with a lot of references to the likes of Genesis, both eras. Graham's main strength is his vocals which is ethereal church choir like and great. He creates the music here with a lot of keyboards, some bass, guitars and drums too. The music has got an orchestral feel.

This album is about the often told Sherloch Holmes mystery with the same name. I have seen this on a DVD and I am not sure why so many are so fascinated by it. But I guess I am from a different culture, a more Scandinavian culture than the English culture. That said, this album tells the story on at least one song. I know next to nothing about the lyrics here.

The music is mostly pastoral and softly spoken. Mostly due to Graham's church like vocals and music. Music which is not always great, but still has a lot going for it. Get a better distribution of this album with some marketing towards ProgArchives and Graham probably has a winner on his hand.

This is a very good album which deserves to be heard. Get it.