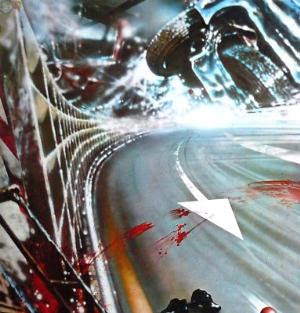 The one and only album from this Italian band. Or project as it was. This combo never made it out of the studio and was disbanded just after the release of this album.

The result is this album, though. The Italian scene spawned some theatrical far-out-there bands too in addition to the more jazzy and symphonic prog bands. Ultima Spiaggia is in the far-out-there genre. There is a lot of spoken words, dialogues, sound samples of war, children's choirs and other non-melodic things in addition to some proper music in the pop-rock and symphonic Italian prog genre.

The music is created with guitars, plenty of vocals, keyboards, bass, drums and a lot of sound samples. The lyrics are in Italian and I get the feeling this album is best suited on a stage as a proper theater or a musical. The ideas is scattered around and the listener never knows what is hitting it the next minute. Not to mention; the next second.

The result is a decent album with some decent music. For non-Italian speakers like myself, I am missing out on the essence of this album. Italians may like this one better than I do. Nevertheless; a decent album.