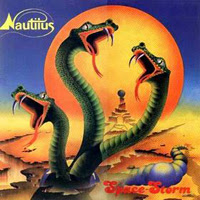 The second and final album from this Swiss band who base their name and music on nautical ideas. Something we don't find in Switzerland whose marine consists of two gun boats, floating around on one of their lakes. That has not been a hindrance to this band, though.

The band has always operated on the lighter side of symphonic prog. On the forty minutes long Space Storm, they have gone into an area later occupied by the more lighter British neo prog bands. Nautilus were neo prog before the British bands who created this scene were neo prog bands. The sound is a mix of the New Romantics scene (ie Human League, Duran Duran & co) and bands like Genesis. More pop than symph prog, though. Add some Saga to this and you get my drift.

The sound is not particular great and all the ills of the 1980s is on display here. The songs are not particular good either. The guitars, keyboards and the vocals is pretty flimsy to say at least.

The end result is a decent album which does not really appeals to me that much. Melodic and a bit poor on substance. Unfortunate, I have to add.