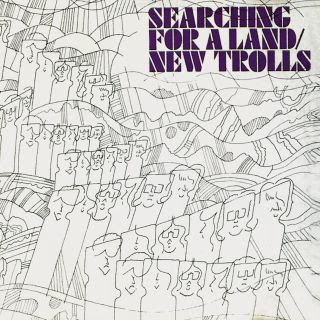 The fourth album from New Trolls.

It is also another change of direction. Or to be precise; directions. At least on this album. A monumental 74 minutes long album which takes in inspirations from the likes of ELP, Led Zeppelin, Deep Purple, Colosseum and Genesis.

The reason for this change of direction and this very ambitious project may be that New Trolls got a new lineup. Vittorio De Scalzi was one of the new members and he put his DNA profile on most of this album.

The album was created by the usual keyboards, English vocals, guitars, bass and drums setup. With this setup, the band made a lot of noise. From pastoral classical music pieces to full out hard rockers. To say that this album offers up contrasts is an understatement. From the pastoral first pieces to hard rock.

The end result is an album, a supposed tribute to the English scene, which kicks in all directions. It is not an album I did expect from New Trolls. I thought the band was a more Concerto Grosso/ELP like band. This album is not anywhere near that. So I am surprised.

When that is said, this is a good album where the hard rock elements does not appeal much to me. Bad copies of Deep Purple/Colosseum/Led Zeppelin is not my thing. I prefer the originals. The more Genesis/ELP stuff is much, much better. This is therefore a good album which I can recommend.