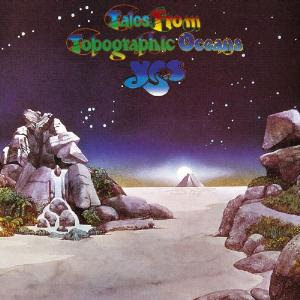 THAT album from Yes. Their sixth overall album and one which still divides people into love/hate communities. It is no doubts this album made way for punk music too and the death of prog rock. Even musicians on this album hates it with a passion. Step forward, Rich Wakeman.

Yes, it is an self indulgent overblown totally over the top album. The album title is perhaps the most overblown album title of all times and is inviting ridicule. With good reasons. It is also an album with some stunning music too. The break downs at The Revealing Science Of God. In fact, all four compositions here has some stunning pieces of music in them. That inbetween some rather not so great pieces of music. It is also an album where Steve Howe is playing the main role with his guitars. There is a surprising amount of guitars here. Rich Wakeman is in the background and that may be the reason why he quit the band midway the tour supporting this album. There is not much interesting to do for a keyboard player on this album. Jon Anderson's vocals is also pretty dominating here.

I find this a great album which really interests me. I also see the funny sides of this totally overblown album. The music makes this a must-have album though and one nobody can ignore. Laugh and make fun out of it too. But you still need this album in your collection.