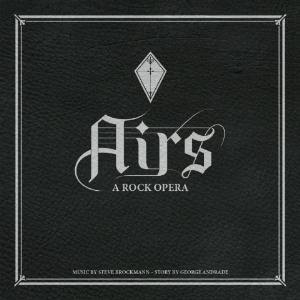 Hmmm..... A rock opera. Two words which is enough to scare satan from his evil works and make him become a good samarithan. Not to mention; make me very scared indeed when I remember that I promised the guys a review. That was seven weeks ago, btw. My own novel, vaguely a rock opera too, has taken up all my time.

Opera is both a great web browser and a stuffy overblown, irrelevant music style. Rock is a revolt and a riot. Rock opera is like mixing water with fire. The end result is most often than not fog.

Steve Brockmann is a German multi instrumentalist and with some solo albums under his belt and George Andrade is most known for his work in The Anabasis. They did the Airs A Rock Opera project over the internet with contributions from numerous others. The story on the rock opera is too long to get into here. I refer to their homepage for the story which was originally meant as a novel in the same vein as I am writing now (thanx for removing the competition, guys). The music though is the most important here.

The music is delivered with a mix of keyboards, vocals, guitars, drums and bass. There is no real organic instruments here and it is wholly an electric rock opera steeped in the 1990s sound.

The music is a mix of US art rock, rock and some harder metal in the German prog metal vein. The music is mostly very good and this album sometimes comes up with some very good melody lines before it retreats back to a more safe good status.

My two major gripes is the largely 1990s power metal'ish sound and the absence of some really great tracks. I am not that happy about the metal stuff here too. By naming this a rock opera, they have also automatically made me as grumpy as a nobleman on his final steps to the guillotine.
There is enough stuff here to label this a very good album though. It has some peaks and some valleys. The meridan is very good. But give it some time. A lot of time. Even then, I am not sure if this rock opera was a good idea. Maybe they should have released the story as a novel instead. Or both.